Changing the game for the better: The Pirates and game-changing plate appearances

Share All sharing options for: Changing the game for the better: The Pirates and game-changing plate appearances

All plate appearances are not created equal. With every at bat comes a cluster of possible outcomes whose values are determined by the situation. For example, there is a huge difference between hitting a double in the eighth inning of a 10-1 game, as opposed to a 2-1 game. Obviously, the double in the close game is much more game-changing than the one in the blowout.

Most statistics are context-neutral, and therefore do not distinguish between the value of the two doubles mentioned. Slugging Percentage, RBIs, OBP, and other statistics just show us the rate or quantity of events. Win Probability Added, or WPA, is different.

By now, most of you are familiar with WPA. Basically, it measures how much each event in a baseball game adds or subtracts to the probability of winning, then credits the change in probability to the batter and pitcher involved. Throughout the game, players gain or lose "wins," which is a direct measure of their influence on the game's outcome.

Via Fangraphs, here's an example of how WPA works:

In sum, WPA is a context-sensitive statistic, which means it factors in the relative importance of the situations that players face when measuring their contributions.  In other words, it captures the fact that not all plate appearances are equal; some are much more potentially game-changing than others.

WPA and its uses

WPA is an excellent storytelling statistic. By simply looking at the WPA totals for a game, you can tell who contributed most to the victory and who was most responsible for the loss.

When a player's individual game WPA scores are added together, they tell us how many total wins or losses for which he is responsible.

Fairly recently, Fangraphs found an excellent way to replace two of baseball's most flawed statistics, saves and holds, using WPA. The result is Shutdowns and Meltdowns.  As described by Fangraphs:

The Fangraphs shutdown/meltdown statistic got me thinking about how a similar ratio could be applied to hitters. That is, why not reward hitters for game-changing contributions, and subtract for game-changing failures?

If a player created a positive offensive event that increased the offensive team's chance of winning by six percent, I credited him with a Game-Changing Contribution.

If a player created a negative offensive event that decreased the offensive team's chances of winning by six percent, I assigned him a Game Changing Failure.

This ratio is not necessarily designed to replace a flawed statistic, but I do think it provides us with an interesting and, perhaps, telling picture of a player's offensive contribution. It also has a certain advantage over statistics like RISP and RBI in that it sharpens our focus on a hitter's ratio of success in creating game-changing events, rather than lumping all scoring opportunities together.

First, I looked calculated the rate at which offensive players were involved in producing game-changing events.

Here is the percentage of game-changing plate appearances for each of the 2014 Pirates' position players. (Click to Enlarge.) 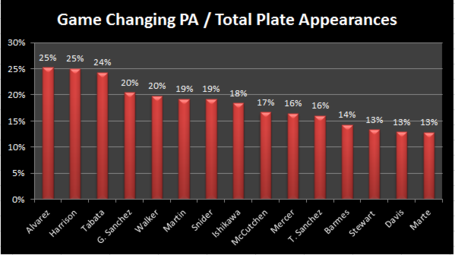 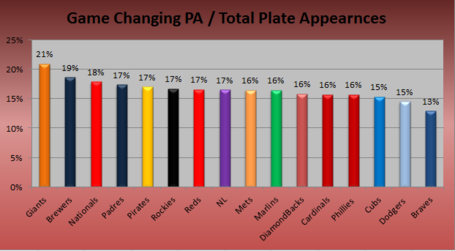 Below are the game changing ratios for each of the Pirates:

("Outs" in the following tables should read "Failures") 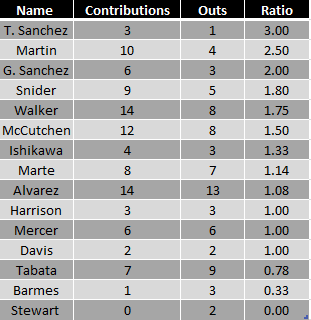 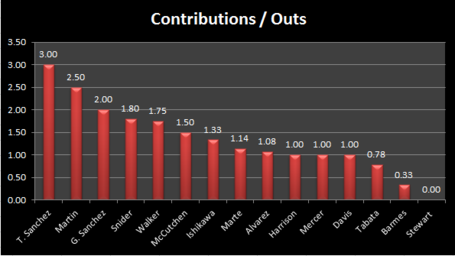 With very limited opportunities, Tony Sanchez leads the way with the best ratio on the team. Russell Martin follows. Surprisingly, Travis Snider rates very well, with Neil Walker and Andrew McCutchen following with strong numbers.  Pedro Alvarez has had the most game-changing plate appearances, 27, with an almost one-to-one ratio between positive contributions and negative contributions. In limited plate appearances, Jose Tabata has the second most negative game-changing contributions on the team.

Below are the team totals for the National League: 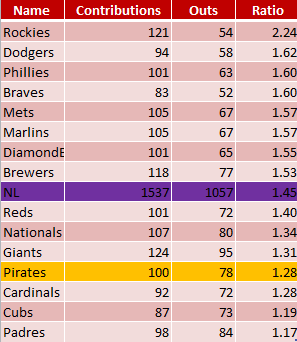 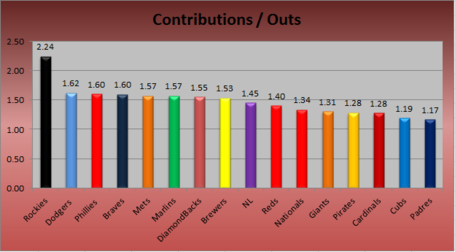 The Rockies are posting the best ratio in the majors, by a large margin. The Pirates are fairly significantly below league average, but they’re matched by division rivals, the St. Louis Cardinals.

For comparison’s sake, the 2013 Pirates posted a 1.53 ratio between game-changing contributions and game-changing outs, which would be equivalent to the current pace of the Milwaukee Brewers.

Finally, here are the career numbers for five core members of the Pirates: 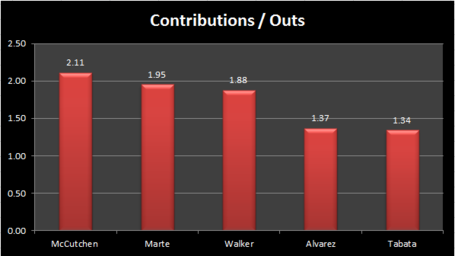 The contribution / failure ratio taps into a phenomenon that is closely related to, but not necessarily the same as, clutch. Like clutch hitting, therefore, these ratios are not predictive, nor can we say they attached to a particular repeatable skill. However, as we see with McCutchen’s career numbers, we would expect that good hitters will have strong ratios.

The offensive ratios do capture nicely in numerical form what we have seen with our eyes: the Pirates are not generating many more game-changing hits than they are game-changing outs. They are near the bottom of the league in terms of success/failure, and well behind last year’s pace. Finally, they starkly show how much Pedro Alvarez’s and Starling Marte’s slumps are hurting the team. As the Pirates lead-off hitter, Marte has a terrible ratio and is far off his career pace. Alvarez has had many game-changing plate appearances (fully 25 percent of his total PAs) but close to 50 percent of them have changed the game in a negative direction. Interestingly, for his career, Alvarez lags far behind three other important members of the Pirates’ core.

These are numbers that I’ll continue to monitor and update as the season progresses.

(All statistics courtesy of Fangraphs.com and Baseballreference.com)