Pirates: Statistical notes for an off-day

Share All sharing options for: Pirates: Statistical notes for an off-day

Some statistical notes for the off day:

Looking purely at the offensive production, Polanco/Marte/McCutchen have posted an aggregate .429/.473/.667 slash line.

Speaking of infield hits, over the last seven days, 11.9 percent of Pirates' hits have been on balls that failed to leave the infield. That is tied for highest in baseball. They are currently eighth overall, with 6.8 percent of their hits being infield hits. With the addition of Polanco, it is not hard to imagine the Pirates leading the league in this category by the end of the season.

Starling Marte currently leads all of baseball with 14 infield hits.

With Pirates relievers posting five meltdowns in the last three games, the Bucs' bullpen now ranks in the middle of the National League in terms of Shutdown/Meltdown ratio: 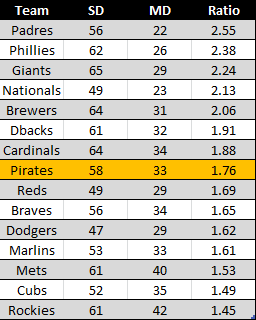 The Pirates are 17-10 in their last 27 games. Part of the reason for their improved record is the offensive outbreak of the past 30 days.

Over the last 30 days, the Bucs have posted a 124 wRC+ (only counting non-pitchers), best in major league baseball. That is, Pirates position players have been 24 percent more productive than an average offense. (In the month of June, that number leaps to an astounding 143 wRC+.)

At the same time that the Pirates' offense has gotten hot, Bucs' pitchers have done a better job limiting runs, posting a 3.78 ERA (12th best in MLB).

Below are some graphs to help visualize the offensive and pitching trends this season.

As we can see below, the Pirates offense is enjoying its highest and most sustained success of the season. 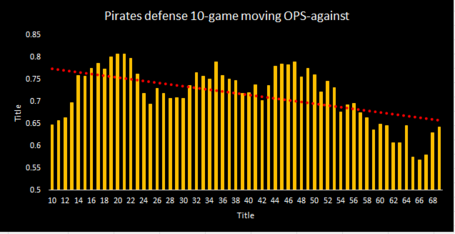 Putting the offense and defense together: 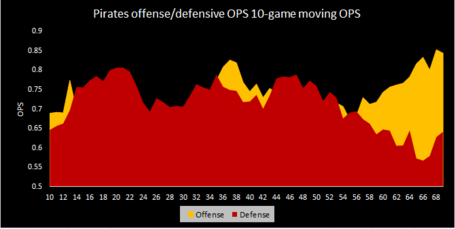 If you're a Pirates fan, you want to see both colors. Where there is both yellow and red, it means the Bucs' offense is outperforming their opponent's offense.

Finally, below are the offense/defense 10-game rolling averages compared to National League average. Bars above the line are over NL average, those below the line are below average.

Guaranteed winning formula is to hit above league average while holding your opponents below. That is represented here by yellow bars above the center line, red below. The opposite is a recipe for failure. 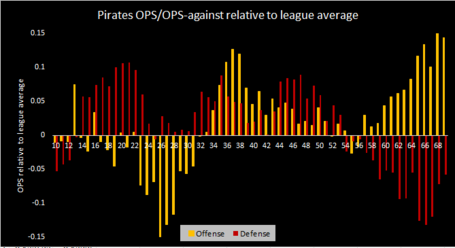 For most the year, Pirates have allowed a higher than average OPS against. On the other hand, after bottoming out early, the Pirates offense has been pretty consistently above average.

Fangraphs' BSR metric is designed to compare all aspects of baserunning (including stolen base attempts) to league average. The statistic is expressed in runs gained/lost above/below average.

The Pirates baserunning struggles are reflected in their BSR ranking: 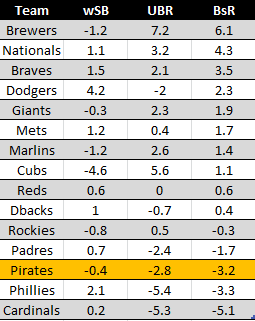 The Pirates rank third-worst in the National League, having lost 3.2 runs due to poor baserunning.

For comparison's sake, the Pirates ranked fifth in the National League last year, with a 2.2 BSR. Looking strictly at UBR, the Bucs were very good on the base paths last year, ranking third and gaining 4.4 runs.

Individually, Starling Marte has the best BSR and UBR on the team, 3.3 and 2.3 respectively. Obviously, we notice his mistakes more than the extra bases he gains because of his terrific speed. The least productive baserunner so far is Pedro Alvarez with a -2.5 BSR, -2.9 UBR (0.4 wSB).

(All statistics courtesy of Fangraphs.com)