The first thing Ernesto Frieri told Ray Searage when he met him this afternoon was that he needed to improve his changeup.

According to Fangraphs, Frieri has thrown the pitch 4.6 percent of the time this season, an almost threefold increase on his career 1.6 percent rate.

Adding a changeup would help keep hitters off his bread-and-butter pitch, the four-seam fastball.

Clint Hurdle described Frieri's fastball as "explosive" and Russell Martin called it "kind of an invisible fastball." In both 2012 and 2013 it was a very effective pitch, but this year things have turned sharply in other direction.

("Value" = runs above or below league average that the pitch has saved or lost.)

Although the sample size is small, the contrasts are striking. In both 2012 and 2013, Frieri's fastball whiff/swing rate was third among major-league relievers, and he saved the second-most runs with the pitch.

Besides adding a changeup to protect the fastball, the Pirates may be interested in tweaking his mechanics slightly. Compared to 2012-2013, Frieri is throwing the fastball over the top noticeably more this season. He has lost about about five to seven inches off of his horizontal release point, and added about two inches to his vertical release. (The dot top-right is 2014, moving down-left is 2013 then 2012.) 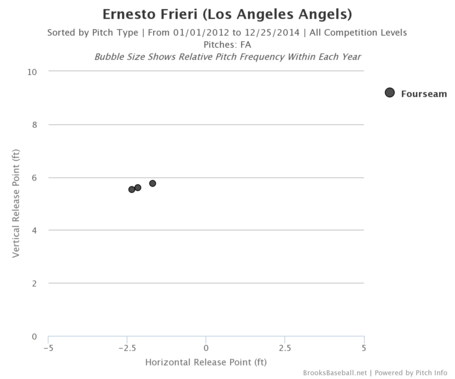 The more over-the-top delivery may have something to do with Frieri's fastballs more frequently ending up middle-middle, rather than up-and-inside against right-handed hitters. Although this analysis is very speculative, one thing is clear: his fastball is crossing the plate in a slightly different area this year than the previous two. 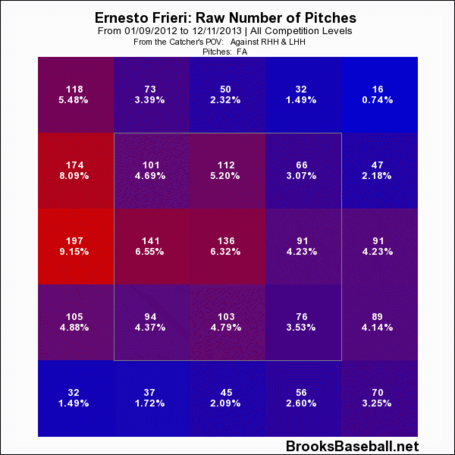 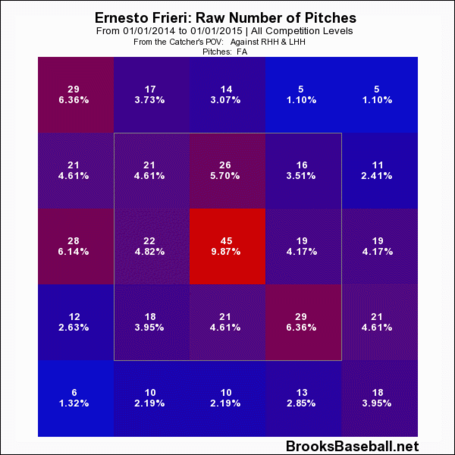 (Another graphic illustration of Frieri's ball crossing the plate at a slightly different angle this year can be found here for 2012-13 and here for 2014.)

Frieri said that he has not noticed any change in his mechanics, other than that occasionally his timing has been off this season.

"Honestly, I looked at my video for the last couple of years and pretty much it's the same. Maybe the timing is a little bit off. Sometimes I'm too quick to home plate, sometimes I'm slow. I just need to find where I feel comfortable to release the ball. Have fun and keep the ball down. I'm fine about that. We'll see how it goes ... I’m a hundred percent sure everything is going to work."

Watching the development of Frieri's changeup and fastball location are worth watching.

Outside of working on regaining his previous form, Frieri said that he is excited to be in Pittsburgh and playing with the Pirates.

"I just took a look last night at the team and at the standings. They're good. Hopefully I can fit right in with this great team and help them to win some more," Frieri said. "I came up with the Padres and actually Pittsburgh was one of my favorite cities. The ballpark is amazing. I'm glad to be here."