A day after being placed on the disabled list, Gerrit Cole played catch at PNC Park at about 2:40 this afternoon. Ray Searage is at his side leaning on a bat. Cole threw 25 pitches, at a firm pace.

This is significant because it means Cole has not been completely shutdown for a few days. It also suggests the Pirates are not worried about any structural damage in the shoulder. That, of course, is purely speculative. 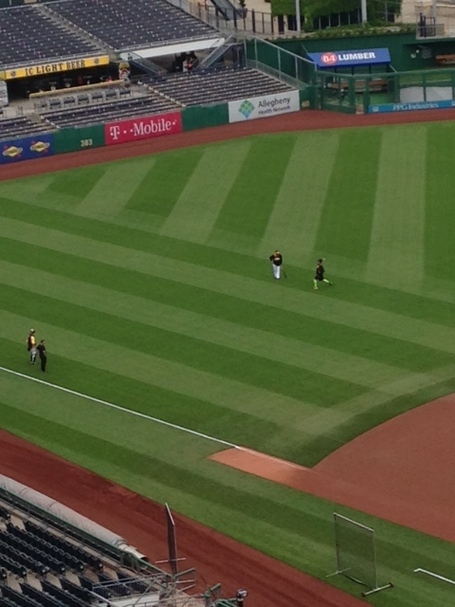 Gaby Sanchez, Clint Barmes and Pedro Alvarez came out before batting practice and took reps fielding ground balls at third base. This is not something that I have noticed very often in past. In particular, Sanchez fielding grounders at third raised some eyebrows.

Alvarez had much less success than the other two with his throws over to first and, at one point, was visibly frustrated. He has committed the most throwing errors in Major League Baseball, 12.

Later, Barmes moved over to shortstop and Sanchez to first.

The infield practiced last about 25 minutes, and ended with Barmes putting his arm around Alvarez's shoulder as they walked towards the third base coaches box. The two then engaged in a lengthy conversation.

Hurdle said that they are focusing on Alvarez repeating the same delivery and getting the throw off more quickly.

Perhaps in a not completely unrelated note, MLB Trade Rumors is reporting that the Pirates have made Gaby Sanchez "available" as a potential trade chip.

Although Hurdle said yesterday that Sanchez would get three starts in a row, Ike Davis is starting at first base and batting fourth tonight.

Hurdle cited handedness as the primary reason for the change.

"I looked a some tape of right handed and left handed hitters against [Edwin] Jackson, and I looked at bats Gaby took yesterday, and I looked at Davis' at bat, and the patience he showed," Hurdle said. "I just thought, for the next two games let's leverage our best lineup against these guys."

Hurdle usually likes to alternate right-handed hitters with left-handed hitter as much as he can throughout the lineup. However, tonight left-handers Davis and Alvarez will bat back-to-back.

"I just don't feel comfortable splitting them with Marte with them right now, or with Mercer," Hurdle said. "I'll take my shots with my two lefties and if they want to go left-on-left later on I've got the option to go with Sanchez."

Sources: #Pirates in agreement with first-rounder (24th overall) Cole Tucker on $1.8M bonus. Below slot of $1.9255M. Will be official Weds.