Share All sharing options for: Pregame: Hurdle 'not impressed' with Alvarez's June numbers, looking for consistency

Notes from this afternoon's pregame meeting with Clint Hurdle:

After a two-game absence, Russell Martin will return to his duties behind the plate tonight.

"He said he felt great and he's back in the lineup," Hurdle said.

Francisco Liriano threw another bullpen on Sunday. He threw 54 pitches out of both the stretch and the wind-up.

"He felt very good," Hurdle said. "Everything has gone well."

On Wednesday, Liriano is scheduled to pitch one inning with a screen, followed by a three-inning simulated game.

"I'm not impressed," is how Hurdle described Pedro Alvarez's offensive performance in the month of June.

"He's done more than this," Hurdle said. "Statistically, we can cherry pick numbers and get good and get bad. But looking at the whole context, consistency is what he is looking for, what we're looking for."

Hurdle added the Alvarez still hasn't had one of those sustained offensive outbursts like the team has seen in the past.

"He works so hard to become consistent," Hurdle said. "He continues to battle, so that's what I hang my hat on."

Hurdle said that one of the keys to Jeff Locke's success so far this season is that the left-hander is pitching from ahead in the count much more often than he did throughout the second half of last year.

"Throwing strikes, his command is in a better place than it was much of last season," Hurdle said. "The number of counts he has been ahead, vs. the number counts [he was ahead] last year. That has been the biggest thing."

Three weeks ago, David Cameron, of Fangraphs, and Mitchel Lichtman, co-author of The Book: Playing the Percentages in Baseball, argued that projections should be trusted more than early-season performance. Cameron and Lichtman showed that ROS projections are much more reliable indicators of future performance than what a player has done through the first 60-plus games. Cameron concluded, "The evidence suggests the conservative path, leaning almost entirely on forecasts and putting little weight on seasonal performance, is the one that is wrong the least."

This topic is particularly relevant for the Pirates, as they have players have a handful of players playing well above and below expectations (e.g. Josh Harrison, Jordy Mercer and Francisco Liriano).  Today, Hurdle was asked about his take on the balance between performance and expectations, and if there is a point where he weighs one element more than the other.

Hurdle declined to give specifics concerning how he negotiates the two sets of data. Instead, he returned to a theme that he has emphasized repeatedly this season (much more than last year): the human element.

"There are a certain number of games and time of the season I look to," Hurdle said. "[Overlooked in this discussion often are] one-on-one conversations with players at those particular times, because those are the meaningful things that can be done."

Taking into account expectations without talking to the person doesn't make "much sense," Hurdle continued.

"I don't know how you try to grow people without trying to relationally investing in them with your thoughts and a good honest conversation."

The Pirates' offense has performed below league average recently, but the winning has continued primarily because of pitching and timely hitting.

In the past 14 days, the Bucs have posted the eighth-highest Fangraphs' "clutch" score, 0.82. That is, the Pirates have picked up close to one additional win over average due to performing well in pressure situations. Clutch hitting has made up for the offense producing nine percent under league average, wRC 91.

The pitching has been around league average in terms of league prevention during the same period, but has picked up the pace here recently in the last 11 days, posting a 3.00 ERA.

Below are the tables we are using to track the Pirates offense and defense this season. They show the 10-game moving average for both OPS and OPS-allowed.

Table I: Yellow = Pirates offensive OPS; Red = OPS-allowed by the Pirates' defense/pitching. The winning formula is for the the yellow to be visible, as those are periods where the Pirates' offense is outperforming their opponents. 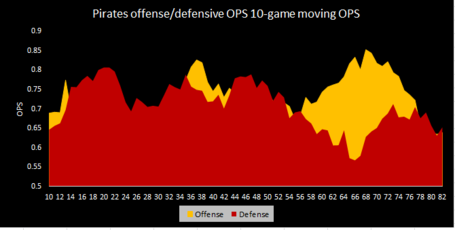 Table II: Again the yellow is the Pirates' OPS, and red is OPS-allowed. The X-Axis is league average. So, the winning recipe is for the yellow to be above the x-axis, while the red remains below. The reverse is a problem. 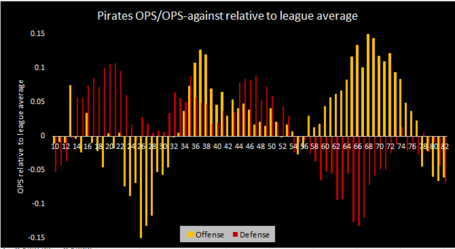