Pirates getting creative with defensive shifts

Share All sharing options for: Pirates getting creative with defensive shifts

The 2014 season is the year of defensive shifts. With every team employing advanced defensive tactics, we would expect to see a spike in defensive efficiency. But, surprisingly, there hasn't been a noticeable improvement: 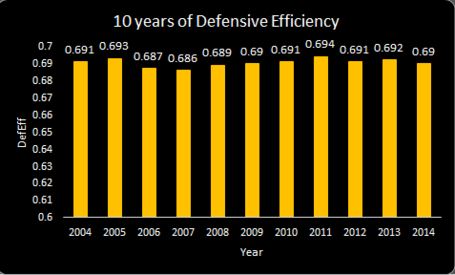 While league batting average is the lowest it's been in the past 10 years (.252), most of that is the product of a historically high strikeout rate (20.3 percent).

Even more strangely, batting average balls in play (BABIP) for ground balls is on pace to be the second highest in 10 years: 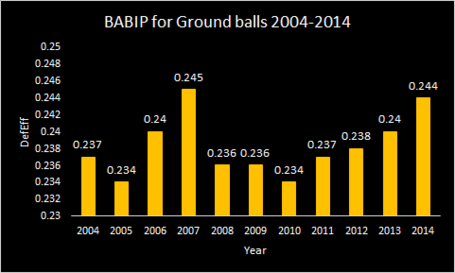 Below is a comparison between 2011 and 2014 for directional ground balls.

(Note: there has been no noticeable change in the direction in which balls are hit: 37 percent pulled, 55 percent up the middle, and 8 percent to the opposite field.)

"Yeah, it's probably a little surprising," said Pirates' Director of Baseball Systems Development Dan Fox, reacting to the ground ball data. "I didn't know exactly what to expect, because we're mostly focused on what we're doing. Since now other teams are doing it more, it would have been the normal expectation [to see the numbers fall]."

"It is a surprising number," Clint Hurdle said. "The first time I heard it I was like, ‘Wow.' It didn't make sense."

"I don't have any initial thoughts [on why it's happening]. The number was just brought to me a little earlier, and I think we need to dig deeper," Hurdle added.

My initial thought was that shifts were giving more territorial responsibility to third basemen who, being typically less rangy and less skilled defensively than middle infielders, were proving less effective than anticipated in covering the larger area assigned to them. (When left-handers hit, often the third baseman shifts over into the shortstop's spot.)

There is, in fact, evidence that third basemen are fielding more balls out of their traditional zone than three years ago. In the traditional shortstop area and the zone between shortstop and third, third basemen fielded 27.8 percent of grounders in 2011 and 28.5 percent in 2014. The increase is greater with left-handed hitters: 19.6 percent (2011) compared to 21.1 percent (2014).

When I separately presented my theory to Clint Barmes and Jimmy Rollins, they both agreed that it was a possible explanation, but not a likely one. Both pointed out that it is actually the shortstop's zone responsibilities that have expanded the most with shifts.

"More, a lot more," Rollins said of his range coverage. "[When] you shift over on a left-handed hitter, my responsibility becomes four to five steps on the second base side as well as four to five steps on the shortstop side. The responsibility becomes more, but it doesn't mean that I'm going to get to more balls. It's just, from where I'm starting, if the [second baseman] is over and I'm over, now I have to pick up where he left [plus my responsibilities on the shortstop side]. Now, the third baseman is over too and he's thinking shortstop side but also [mostly] concerned about balls not crisply hit down the line."

Perhaps, then, what we're seeing is a consequence of giving one player most of the responsibility for fielding grounders hit up the middle instead of sharing the duty between two players with the traditional defensive alignment. This would explain some of the lost efficiency on ground balls hit through the second base and shortstop areas. Some indication of the increased responsibilities that shortstops in particular have shouldered is evident in the the substantial increase in number of balls fielded by the shortstops in the second base zone against lefties, 3.7 percent (2011) to 6.6 percent (2014).

Both Rollins and Barmes were surprised to hear that BABIP on grounders was up, but they also said that ground ball data wasn't the whole story when it comes to the utility of shifting.

Rollins shook his head, "Hmm, yeah, you'd expect the [ground ball] numbers to be down." After taking a moment to consider how to explain what was going on, he asked, "What about line drives?" I didn't have an answer because I hadn't thought about what suddenly appeared obvious. "I've seen so many line drives right past the first baseman and that third or second baseman is sitting there in that hole, and you're saying, ‘It's not fair.'

"From what I see, looking at line drives may be the place to look [for the effectiveness of the shift]. I mean, we see it with Ryan [Howard], [Domonic] Brown a little bit, and balls that come off that bat, he's like, ‘Yes!' and the guy's sitting there," Rollins continued, jokingly adding, "And that should be illegal, it's stacking the field."

Rollins is right -- BABIP for line drives hit to the infield is down from .159 (2011) to .147 (2014). More impressive is the effectiveness of the shift in limiting hits on infield line drives against left-handed hitters. 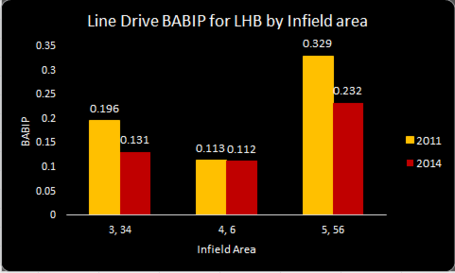 What stands out is not only how shifts have cut down on pulled line drives, but how moving the third baseman over is cutting down on liners hit to the opposite field. 68 percent of opposite-field line drives by left-handed hitters are being fielded by the third baseman. That is up from 60 percent in 2011.

"You're taking something away, and you're giving up something," Rollins concluded.  "The downside is a lot of mis-hit balls making it through the other side, but those guys aren't paid to mis-hit balls on the ground."

Guys not being paid to "mis-hit balls on the ground" is a subtle, if not overlooked, point when evaluating the effectiveness of shifts. They tend to reward hitters for accomplishing things outside of their intrinsic skill sets. Clint Barmes basically made the same observation when I talked to him a few days earlier.

Like Rollins, Barmes was surprised to learn of the ground ball statistics, but he immediately added, "More goes into it [shifting] than stopping ground balls from getting through. It's more about getting hitters to change their approach."

Barmes said that if a hitter like David Ortiz tries to change his approach to avoid the shift and ends up getting on base via a weak ground ball, "I'll tip my cap." It is ultimately a win for the defense, he continued, because any time a dangerous hitter is forced to adjust out of his comfort zone, he becomes much less of a threat.

In effect, Rollins and Barmes are saying that shifting is less about increasing defensive efficiency and more about reducing threat levels.

"[Barmes] is certainly right," Fox said when I asked him if the point of shifting is more nuanced then just lowering BABIP. "When we talk about it, there's certain guys [for whom] that's essentially the message we're giving them. If [Lucas] Duda or [Anthony] Rizzo want to do that [change their approach] then for the most part we're going to let them ... There is no question on some guys you're just trying to limit damage."

Fox added that the shift can also hem hitters in from both sides. It discourages an aggressive pull approach, and by moving the third baseman in slightly, the defense can discourage shift-busting bunt attempts.

"There is a nice line you can kind of draw, and you've seen Pedro do it quite frequently, where he'll be over towards shortstop and he'll be a step on the dirt, and so he's not going to field a bunt from there, but with some guys it does stop them from doing it. It stops them from thinking about it, which is kind of odd, but effective. So I think you can get the best of both worlds with certain players."

Limiting the damage of dangerous pull hitters seems to be working. Although there are likely more finely tuned ways to explore the effect, I found a .027 decrease (.432 to .405) in slugging percentage in 2014 for 65 left-handed and switch hitters who pulled the ball to right field more than average between 2011 and 2013. In other words, hitters who, based on recent history, were most likely to be extremely shifted are having less success this year (although the effect is perhaps not as dramatic as anticipated).

The fluid nature of the Pirates' shifting strategy

The members of the Pirates organization I talked to also emphasized that successful shifting depends much more on pitchers carrying out the game plan and in-game adjustments than is widely acknowledged.

Barmes said that before every game there is a tactical plan mapped out that pairs the pitching approach to the defensive alignments. When everything works right, the pitcher hits his spots and induces hitters to put balls in play where the defense is aligned. However, he said, once it is clear that a pitcher doesn't have good control, or that the opposing team is successfully adjusting to what the Pirates are trying to do, then everything changes on the fly.

"[The coaches and players] are aware that certain hitters may try certain things at certain times," Fox said when I asked him about Barmes' assertion that a lot can change within the context of a game. "But then during the game, based on what they've seen in previous at bats and what the pitcher is doing, they definitely make adjustments. So [Nick] Leyva does that with every at bat, essentially. So the information we give them is, we treat it as a baseline, you know, so here's kind of the baseline and then he is going to adjust at any time that he thinks he needs to."

"We've gotten really creative with it," Hurdle said, echoing Fox and Barmes' observations that defensive shifting is a more on-the-fly than perhaps has been appreciated. "There's times where we'll actually audible. And, we've given players the ability to audible. And as you know, I've got coaches that have the ability to audible. We're very open-minded team once the game starts. We're not looking for one guy to make all the right decisions. We'd be in a terrible place if that were left upon my shoulders every day."

It is pretty clear that the Pirates' analytics team does not set static defensive alignments and the coaches simply make sure everyone is in their proper preset position. Instead, as Fox said, the analysts develop a baseline from which the players and coaches are then given the flexibility to make adjustments as needed. In-game tactical modifications, therefore, play a much larger role in setting up the defense throughout the game than perhaps was previously acknowledged. As such, the credit for the Pirates' improved defense should be shared more equally between the analytics team and coaching staff than has been the case recently.

I don't know whether the Pirates are ahead of other organizations in this regard, but since they were among the first teams to fully embrace defensive shifting, perhaps they are working at a slight advantage in developing pitchers to fit the new defensive patterns. And since the coaches throughout the organization have been working with the shift longer than those of most other teams, it would also make sense that they have an advanced understanding of how to make more effective in-game adjustments.

With all teams using spray charts to set their defensive alignments, it may be variables such as pitch control and in-game tactical adjustments that will provide important points of separation between teams as the era of advanced defensive shifting evolves.