"Ray [Searage] said it went very well, his fastball, changeup, it was was 30 pitches. So, after he settles down today we'll revisit the next step."

As the Pirates prepare for the stretch run still very much in contention, Hurdle said that the experience the team gained from last year's pennant race has "paid off already" this season.

"There were a number of times through the first half that we had to dance with adversity," Hurdle said. "We're not overwhelmed by it. We know what we need to do. ... There's not a panic. They all have the mindset of, 'We've got this.'"

Hurdle also attributed some of the team's struggles late in the 2011 and 2012 season to a lack of experience.

"It was the difference in the first two years, us not having been that position [before]. Getting knocked down and then everybody wanted to be the the guy, and you just need to be you."

Frieri's role in the bullpen

Hurdle described Ernesto Frieri's role in the bullpen as a "work in progress."

"[When he first arrived] I threw him into spots with some men on base and he fared very well." Hurdle said. "So I thought I was really smart and I gave him a clean inning, and he walked the first two hitters he faced, so shame on me. I haven't figured that one out yet. He had also pitched three out of four days so that may have factored into it. We're still looking for a role for him."

When I first talked to Frieri after he arrived in Pittsburgh, he mentioned being uncomfortable with his changeup grip. He said it was the first thing that he mentioned to Ray Searage when the two met. Today, I asked Frieri how the work on his grip is going:

I'm getting close. I'm working with Ray [Searage] and Euclides [Rojas], the bullpen coach. They're trying to give me the right information. We're working every single day, like 50 minutes before everybody stretches. I get out early and try to get a feeling for those pitches, both my fastball and my changeup. I'm getting close.

I'm not ready to bring it into a game yet, but today I had a good feeling, so if I get a chance to pitch tonight and I see the opportunity to throw it, I might.

During the last homestand, Ray Searage said that another challenge for Frieri was maintaining a consistent arm speed between his fastball and changeup. Frieri said that it is something they are still concentrating on:

Exactly. I can throw a good changeup that breaks down, but it won't be with the same fastball arm speed. So that is what we're working on. You can do that [have different arm speed] in Double-A or Triple-A, but not here. So, that's what we're looking for throwing every pitch with the same arm speed that I throw my fastball. We're getting close. These guys are doing a really, really nice job with me. Working really hard for me. Looking at videos and trying to get me the right information.

Finally, we've looked at how Frieri's arm slot changed rather dramatically this year, becoming much more over-the-top. The right-hander said that it was surprising to him how much his mechanics had changed:

For some reason, my arm slot had been changing. I just found out that when I got here. I didn't know, but my delivery and my mechanics changed a lot. I was stepping across my body a little bit and I used to be more like three-quarters. For some reason with the Angels I got higher [arm slot]. So they want me to go back to "Old Ernie" that they saw like four years ago with the Padres. I had a special talent with deception. For some reason, when I bring my arm up, I lose deception. We're trying to gain that back. They're really helping me bring back my deception.

Although it is very early, there is some evidence that Frieri's arm slot is slowly moving back to a more three-quarters release point.

The dots on the graph are Frieri's fastball release point for each game in June and July. The two dots to the far left (most horizontal) are from his last two appearances in Cincinnati. 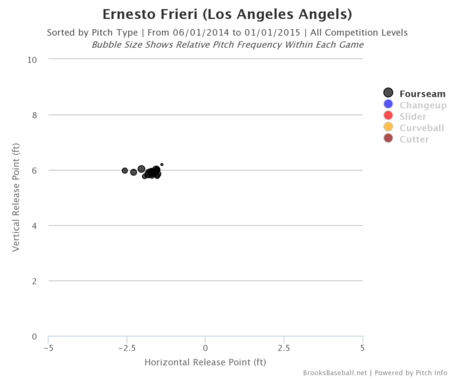