Starling Marte is not in tonight's lineup. Clint Hurdle said they are taking it "one day at a time" with him and that he might be available off the bench.

Pedro Alvarez took early infield practice this afternoon. Nick Leyva accompanied him, and the two of them paused and seemed to be working on a specific set of mechanical adjustments. During the session, I did not see him once pause and look at the ball before throwing.

According to Baseball Reference's play index, 15 of Alvarez's 21 errors have occurred on balls to his left, in the zone between the shortstop and third baseman. In total, Alvarez's errors have cost the team -0.8 WPA, or almost a full game. The most costly error occurred on May 1st, in Baltimore. With runners on first and second, no out, and the Pirates leading 1-0, Alvarez committed a throwing error that reduced the Pirates probability of winning from 45 percent to 35 percent. The Bucs allowed three runs in that inning and lost, 5-1.

"This guy has probably played a more athletic third base this year than he has any other year he's been here," Hurdle said. "The challenge has been on the throwing side ... so we're still working through that."

"We have talked to him about taking a few days off of work, because he is a player that loves to work and trying to get better," Hurdle said. "So we'll see how that plays out especially against the large volume of left-handers [we'll be facing]."

Fangraphs' measure of run allowed/saved via errors lists Alvarez as allowing the most runs in baseball, costing -5.6 runs. Largely because of his defense, he ranks 121st out of 162 qualified position players in WAR, 0.7.

Hurdle was asked about Marte's running mistake last night, where he ran right through Leyva's stop sign and tried to score on an inside-the-park home run.

"If you look at the tape, I think there was a point in time rounding second base where he just made his mind up he was going to go and so never saw [the hold signal]," Hurdle said. "Now, that comes with baseball awareness and that's one area that he has plenty of room to improve upon."

Marte is tied with Yasiel Puig for most outs made on base, with 12.

A few weeks ago, we looked at the tremendous horizontal movement that Charlie Morton is getting with his curveball. Here are a few more notes to add to that discussion:

- Today, Brendan Miller posted a study on Fangraphs that provides pitch movement benchmarks (i.e. the average horizontal and vertical movement that pitchers generate with each pitch). Here is how Morton's curveball compares to average:

(Note: I made a mistake earlier. Vertical break is more than I originally listed)

Morton is getting over two-and-a-half inches more horizontal movement than the average major league pitcher. And, his vertical break is almost an inch-and-a-half more than average.

- Also, at this pace, Morton will rank only behind Bronson Arroyo's 2007 season for most average lateral break.

(Data only goes back to 2007. Table includes starting pitchers who threw 200-plus curveballs.)

- Finally, a graph showing the movement Morton is getting this year compared to his career: 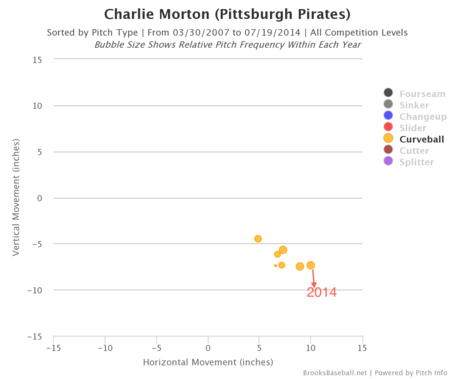 Morton one of the unluckiest pitchers in baseball

In another recent Fangraphs article, Morton was ranked as one of the unluckiest pitchers in baseball. He has suffered from what the author, Aidan Hall, calls bad "cluster luck."  Basically, cluster luck deals with the sequencing of hits and walks allowed. When hits/walks are clustered together, a pitcher will allow more runs. On the other hand, the more scattered hits/walks, the fewer runs allowed. For the season, Morton has allowed 4.15 runs-per-nine innings, but given the offensive performance against him, he should have allowed only 3.36.

One idea behind this type of study is that abnormal cluster luck in either direction will behave like BABIP and regress. If accurate, than Morton is a good candidate to have an even better second half.