Share All sharing options for: Pregame: Charlie Morton's curveball breaking more than ever

Clint Hurdle said that Francisco Liriano "showed some rust" but there were "no complications" during the left-hander's simulated game this afternoon.

The next step will depend on how Liriano feels tomorrow. He he feels good the team will schedule a rehab assignment.

Charlie Morton's curveball has been very good this season.

According to Fangraphs' measure of pitch value, he has saved 5.3 runs compared to average with the pitch this season (seventh-best amongst qualified starters). Additionally, he has saved 1.57 runs per hundred times he's thrown it this season, the highest rate of his career.

Perhaps the reason for Morton's success is the horizontal movement he is generating. The table below shows the rather dramatic spike in break he is getting from his curve. 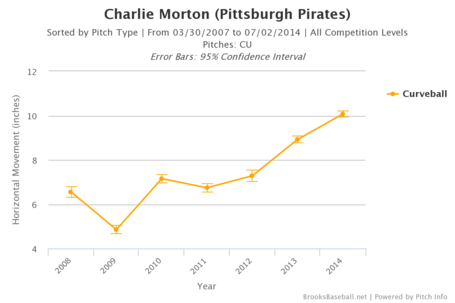 According to Fangraphs, Morton's curve is second only to Corey Kluber in terms of horizontal movement (amongst starters).

"It's a very good breaking ball," Hurdle said. "He's gotten sharper with it. There's been less dings on hitters with it. There have been some out of his hand that haven't been quality and have backed up and hit some left-handers on the foot. He's truly throws a back foot breaking ball."

If you have not used it, Baseball Prospectus has a interesting tool that tracks bullpen (mis)management. In short, it tracks how teams are matching their relievers to leverage.

The table below shows the number of appearances (black) and the average entering leverage (blue) that each Pirates' reliever has faced. Mark Melancon's entering leverage is now about equal to Jason Grilli's final average, with Tony Watson trailing somewhat behind. Bryan Morris was once again this season used in relatively high-leverage situations before being traded. Surprisingly, Jared Hughes and Justin Wilson have very similar entering leverages. Perhaps these numbers shouldn't be too surprising as Hughes and Wilson have posted very similar SIERA numbers -- 3.62 and 3.64, respectively. 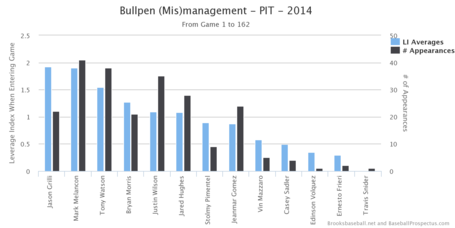 The next graph shows how Hurdle has deployed Melancon, Grilli, and Watson relative to leverage in five-game blocks. Grilli consistently was used in the highest leverage situations through the first 50 games, before being dropped on par with Watson and Melancon, then replaced and eventually traded. 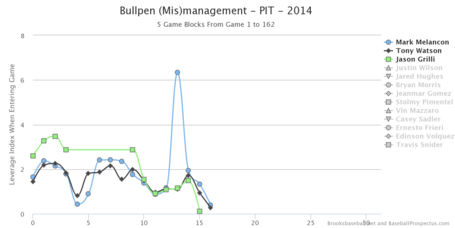 Finally, here is a look at Hurdle's usage of Hughes and Wilson over the first 83 games. 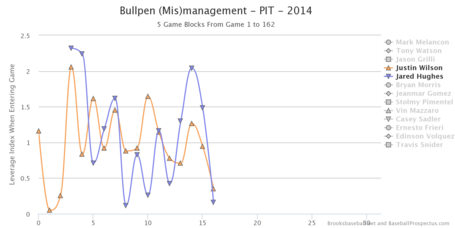