Gerrit Cole will pitch a sim-game on Wednesday. The plan is for him to pitch three innings, 55 pitches.

The most dramatic change in Volquez's season, however, is the effectiveness of his curveball. Last year he allowed 10.8 runs above average with the pitch, this year he has saved 3.4. The batting line is telling:

Part of the reason for his new found success with the pitch may be that he is getting substantially more vertical drop from a year ago. 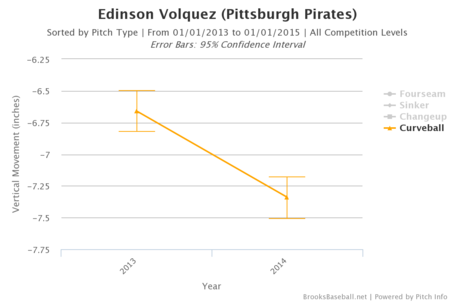 On the other side, it is surprising to find that the Pirates' offense ranks 24th in generating hard contact, 14.4 percent.

Hurdle was asked about how Gregory Polanco is adjusting to life in the major leagues this afternoon, in terms of the increased travel and attention. He responded that part of the challenge for the young right fielder is juggling all the media requests and attention he receives away from the park. As an example of the latter, Hurdle told an interesting anecdote that I founding interesting listening to, and thought you might enjoy reading:

"Actually in St. Louis, a funny story. Wasn't funny for the people involved, but he's walking across the street and once he comes out he didn't have his posse with him, like three or four of the players. A beehive [of fans descended on him]. I watched him go, more people and more people [surrounded him]. So, finally, I walked over and took him by the arm and said, 'come on with me.' And, of course, you get a big kick-back [of people complaining] and, I said, 'I'm sorry, I'm the bad guy here. But he doesn't have the responsibility to sign every autograph that he's asked to sign every night. So, I'm going to take him away and take him across the street.' So, (laughing) I got my arm around him, walking him across the street, and we get him to the hotel.