In the top of the second, Gregory Polanco hit a laser into the right field seats putting the Pirates ahead, 3-0.

It is common to describe a hitter as "golfing" a pitch, but I've never see a better (or scarier if you're a pitcher) demonstration of that metaphorical description than Polanco's home run tonight. Chase Anderson delivered what should have been a safe breaking ball that was dipping about shin-high when it reached the plate. But Polanco reached down and sent it on a line straight into the right-center Clemente seats.

Here's the pitch just before liftoff.

Hurdle added that the league is already adjusting by throwing him more breaking balls and changeups, but that Polanco "has fired back a little bit."

Polanco was asked if he is noticing pitchers starting to attack him differently.

Morton keeps runs off the board again

"He just moved the ball around with what he had tonight," Hurdle said. "The walks challenged him a little bit, but when it came push time he didn't give."

"I felt comfortable going into the game, but I don't feel like I ever got into a good rhythm tonight," Morton said. "When I got into a tight spot I made some good pitches. But I really didn't get ahead of guys."

In the pregame post, we looked at the tremendous lateral movement Morton is getting from his curveball this season. When asked about it after the game, right-hander said that too much horizontal movement actually can be problematic. The key, he said, is control.

"Early on in the year I was getting more lateral movement, which I don't prefer," Morton said. "It's tougher to throw a strike if the ball is moving more laterally [because the strike zone is smaller horizontally than vertically]."

Morton added that he is getting a better feel for the curve as the season progresses, and that is leading to a higher strike percentage.

For the season, Morton's strike percentage (not including foul balls) is up to 36.4 percent from 32.2 percent last season. Over the course of the season, his whiff per pitch percentage is spiking: 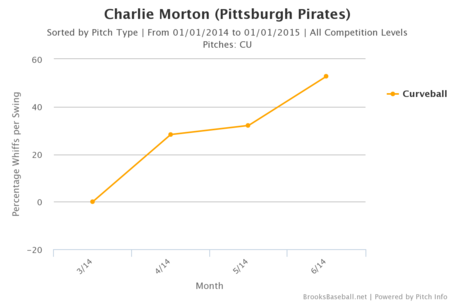 Tonight, Morton threw 30 curveballs: 10 for called strikes, 10 for balls, two swinging strikes, five foul balls and three were put into play (one for a hit).

McCutchen leaves game in bottom of the eighth

In the bottom of the eighth, Andrew McCutchen fouled a pitch off his foot. Starling Marte took his place in center field in the ninth. There is no update on his status and McCutchen was not available after the game.

"Looks like his left foot hurts," Hurdle said when asked about McCutchen.