Share All sharing options for: Pregame: A person of interest faces Bucs

He is scheduled to throw a five-inning, 85-pitch rehab game in Indianapolis on Monday.

When asked when Liriano might rejoin the Pirates' rotation, Clint Hurdle said he did not want to get ahead of things.

"I want to make sure we give him the mound time he needs to get confidence back and his body and arm. So I think we'll continue to take it one outing at a time."

A person of interest

Last week, John Perrotto reported that the Pirates were expressing interest in tonight's starter for the Diamondbacks, Brandon McCarthy.

On its face, McCarthy is exactly the type of pitcher that the Pirates would be interested in. His surface numbers are bloated (5.11 ERA, 2-10 record), but his underlying indicators look fairly strong. His strikeout rate is up 6.5 percent from last season, 13.2 to 19.7 percent. His strikeout-to-walk ratio is strong, at almost 5:1. And his ground ball rate ranks sixth, 55 percent (qualified).

The best indicator that McCarthy could be undervalued in the trade market is the difference between his ERA and SIERA. (SIERA is a slightly better ERA estimator than the popular FIP statistic: more on SIERA here.) McCarthy has the biggest split among qualified starters this year:

His Achilles heel the last two seasons has been a very high BABIP, .327 (fifth-highest among starters with 120-plus innings pitched 2013-2014), a low strand rate, and a high home run per fly ball rate.

"Over the history to the game there are abnormalities," Kirk Gibson said this afternoon about McCarthy's numbers. "There are indicators of what should happen, and he has pitched better than his record for sure. He's throwing the ball better, but at the same time he hasn't made pitches when he needs to make pitches."

A few days ago we looked at Ernesto Frieri's release point and speculated that it may have something to do with the angle that his fastball was crossing the plate this season compared to the previous two. At the risk of making too much of this analysis, I quickly looked at Vance Worley's release point: 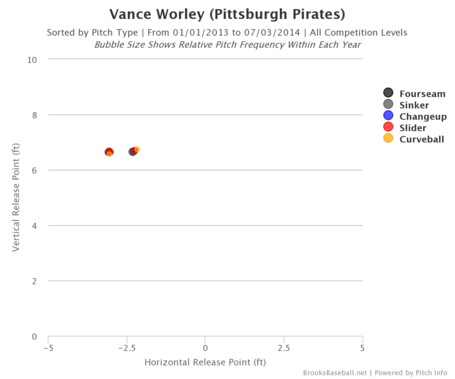 The dots to the left are 2014. He is more horizontal this year than last.

Whether the the two are related or not, Worley seems to also be getting more lateral movement from his fastball, as well. 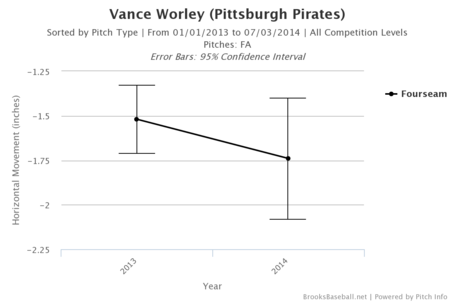 I missed Ray Searage this afternoon, but I hope to talk to him in the coming days about his type of analysis.