Neil Walker was removed from the Pirates starting lineup for today's game.

"I think we're coming to a crossroads here," Clint Hurdle said. "I don't think he felt as good as he was hoping to this  morning when he came in."

No final decision has been made on a possible roster move.

"We'll revisit after the game, possibly, what our next move will be in conjunction with how he feels," Hurdle said.

Walker pinch hit in the ninth inning last night, so the Pirates have lost the ability to back-date the start of the likely disabled list stint to Wednesday.

Jayson Nix will start in place of Walker at second base and bat seventh.

If Walker is placed on the disabled list, Brandon Cumpton is a likely candidate to be added to the roster. He was scratched from his start Thursday, which Hurdle said had nothing to do with any health issues. Further, Hurdle agreed with the characterization of Cumpton as a "safety valve" in case a player on the 25-man roster needed to be placed to the disabled. list.

Andrew McCutchen will continue to throw, hit and participate in resistance training today.

"He has been able to ramp it up each day," Hurdle said.

Today's pitching matchup pits two pitchers who throw a lot of breaking pitches and induce a lot of ground balls.

The high ground ball rate rates have translated into a combined 39 double plays turned behind them, Morton with 20 and Ross with 19.

Since joining the Padres, Ross has turned into a different pitcher primarily because of the effectiveness of his slider. Although we're dealing with fairly small sample sizes in 2011 and 2012, the changes in his numbers are jarring.

In the last two seasons, Ross has increasingly thrown the slider and it has returned great value. The 16.2 runs he has saved this year with the pitch ranks second amongst qualified starters. As the slider frequency has increased so to has the swinging strikes, and swings induced outside of the strike zone. To the last point, in the table below you can see that Ross' slider fairly consistently ends up outside the strike zone -- low and outside to right-handed hitters, low and in to lefties. 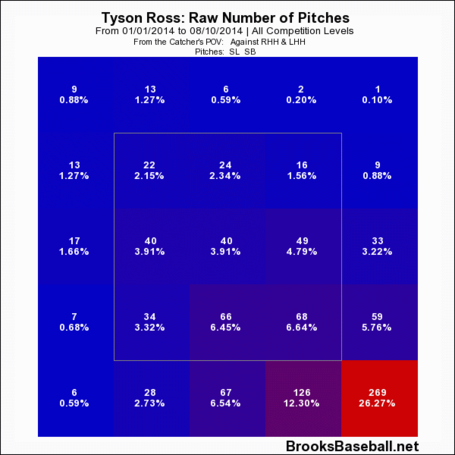 Hurdle said the challenge for Pirates hitters today is to get Ross to throw the pitch up in the zone. That may be difficult as he's had really consistent command of the pitch, inducing swings as the ball fades out of the bottom corner of the strike zone.

"The guy has just gotten better," Hurdle said of Ross before today's game. "I think we saw him last year right before he started to put this thing together. I've been watching him from afar and every time the ticker would come up and you'd see Ross, San Diego, it's eight innings, it's seven innings."

"Short break, good downhill plane, uses it a lot," is how Hurdle described Ross' slider. "Gosh, it's almost a 50-50 pitch (used 50 percent of the time) against right-handed hitters, and it's about a one out of every three pitch against left-handed hitters.

"It's all good. This guy has been in a good place," Hurdle said.