Charle Morton threw 73 pitches and four complete innings during his rehab start in Altoona. Clint Hurdle said that he liked the number of strikes Morton was able to throw, but it doesn't sound like the right-hander is feeling much relief from the hernia.

"He felt like he was able to execute pitches," Hurdle said. "[He] didn't feel significantly better than the last time he took the ball. We're going to get his feed back and decide what step is next."

Travis Snider said his hamstring is feeling better, but he is uncertain if he'll be able to come off the bench in a pinch-hitting role tonight. He described his pain as "discomfort."

"I've dealt with these types of injuries in the past," Snider said. "If you can limit the exposure over the first couple days, it puts you in a good position to be healthy in the coming weeks."

Snider didn't put a date on when he thought he'd be ready to return.

Hurdle had no update on Pedro Alvarez and was unsure whether he would be available off the bench tonight.

With Snider out of the lineup, Hurdle slotted Jose Tabata into the second spot in the order for tonight's game. It is a curious decision, as Russell Martin or a hot Ike Davis would seem like a nice fit for the role. We've been down the road of talking about the two-hole numerous times this season, so I'll just provide Hurdle's explanation:

"Sometimes it's just putting one guy in one spot and not moving five others," Hurdle said. "Tabby's got some history with this guy. He's found his way on base percentage, a little bit of slugging percentage and actually about a .800 OPS [against Leake]. [I'm] always looking for a guy to put up top to get on base in front of the guys hitting three and four. And, there is something to be said about if I move him, how many other guys do I have to move? Who matches up good in that spot? I kind of like how the other guys have set so far."

Tony Watson threw 42 pitches on Tuesday and Wednesday, but is probably still available for work tonight. Hurdle said that the first report he received from Ray Searage was that the left-hander was "Ok" for tonight's game. His status could change after throwing this afternoon, however, Hurdle added.

Edinson Volquez's fastball velocity continues to be strong late into the season. As Travis Sawchik pointed out, it has spiked at 95 MPH in his last two outings. Here is a look at his monthly average fastball velocity this season. 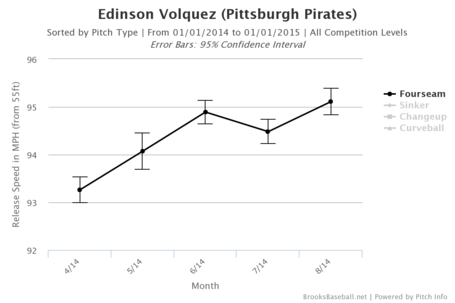 Hurdle had an interesting explanation for why Volquez, in particular, and pitchers, in general, might see their velocity numbers spike late in the year.

"If your an outfielder and want a stronger arm, you throw for more distance more often," Hurdle said. "And, a pitcher that throws his fastball more often, I believe, has the ability to get in a better place from the mechanical aspect of it ... overtime, if you're throwing your fastball more and your mechanics are lined up, you'll get the best optimal velocity from what you have. I think that is what we're seeing."

Volquez is throwing his fastball at a higher rate this season than the previous two:

-P- Volquez has the lowest ERA amongst Pirates starting pitchers in the month of August, 2.35.