-P- Brent Morel has returned to the Pirates 25-man roster. In a corresponding move, Jeff Locke has been optioned to Triple-A Indianapolis.

The Pirates rotation will be unaffected by the roster moves of the past two days, as both Locke and Gerrit Cole will rejoin the team when rosters expand Monday.

-P- There is not a lot of good news to report regarding Charlie Morton's status. The right-hander said that it is unlikely he will feel better this season, as he deals with a sports hernia in the inside of his right hip, lower right abdominal region. With an injury of this type, rest won't make a significant difference in the short term, and surgery after the season remains a real possibility. Morton said that he can still pitch, but that the pain becomes progressively worse and affects his delivery the more he throws. In particular, he feels increasing discomfort through the lower abdominal region when he pushes off the rubber with his right leg.

Morton said he would like to help the team and is open to pitching out of the bullpen, but there is the question of how effective he can be in that role, plus every time he throws he runs the risk of making the hernia worse. The Pirates and Morton have a tricky decision ahead of them.

Morton injury emerged during his June 2nd start. He has posted a 4.33 ERA in 79 innings pitched since then, and his fastball velocity has noticeably declined. 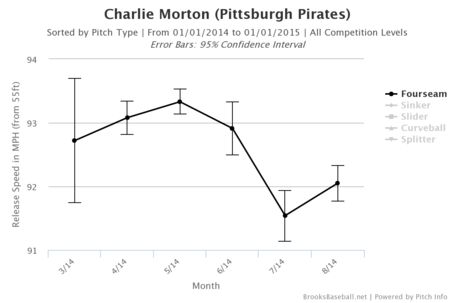 -P- Clint Hurdle continues to plug the right fielder of the day into the number two hole in the order. Andrew Lambo will fill the role this evening.

"We're looking for quality at bats," Clint Hurdle said of what they expect from Lambo, generally. "We're looking for some gap power, some ability to change the game. We're not asking him to do anything he hasn't done in the minor leagues."

"His time has come now," Hurdle continued. "He is going to be with us from now to the end. We're going to try to find the proper places to plug him and give him the opportunity to grow a little more than he had the opportunity last year."