Share All sharing options for: Pregame: Charlie Morton returns against the Red Sox

Clint Hurdle said that the rotation for the weekend series against the Brewers will be Jeff Locke, Edinson Volquez, and then Sunday's starter to be announced. The starting pitcher for the final game of the series appears to be contingent on how deep Charlie Morton is able to go in tonight's game.

"Charlie's throwing tonight," Hurdle said. "It's Worley's night to throw. So we'll just see where Charlie is able to take the ball tonight and then make the next decision."

Hurdle also said that it is "too early" to start adjusting the rotation for a possible Wild Card game.

"I think there is a point in time when you start counting down games and see where things stand," Hurdle said. "We're not anywhere close [to that]. ... We'll have conversations as we lead to it, if they are needed."

In Philadelphia, Morton mentioned that he is not feeling any better than he did in July. The pain from his sports hernia is persistent, and he doesn't expect any improvement until he deals with it in the off season.

"It's not going to get any different," Morton said. "I came to grips with [that] in late July. It's just not getting any better."

Morton said that he feels discomfort as soon as he starts pushing off with his right leg. Moreover, the pain plateaus when he throws following inning breaks. If he stays warmed-up he feels better, but when he cools down it's difficult to get back going again.

Today, Hurdle said that the team has plans to try to keep Morton warm between innings, if needed.

"We've talked about it [and] we'll go according to how he is feeling," Hurdle said. "If we need to make an adjustment along the way, there is a stationary bike down there. He can be stretched by the trainers. There's heat pads. There are a lot of options in play if it comes to that."

No Liriano against the Brewers

The decision to start Charlie Morton tonight means that Francisco Liriano won't pitch against the Brewers. With the off day yesterday, he could have pitched tonight on regular rest and then Sunday. Hurdle said that the decision not to pitch Liriano had nothing to do with the left-hander feeling any discomfort other than the normal wear of the season.

"There's no injuries to any of our starters to talk about," Hurdle said. "We're keeping [Liriano] in a place that we feel is most productive for him, as well as the group. As our conversations went, this is the direction we decided to go."

Hurdle won't be watching the scoreboard any closer than usual, but will the players?

While the Pirates are engaged with the Red Sox over the next three days, there will be critical series playing out in St. Louis, as the Brewers visit the Cardinals.

Hurdle said he has neither a rooting interest nor will he be paying any extra attention to what is happening in that series.

"I went through a series of events in 2007 that probably had as much scoreboard watching and cheering and things going that you could ever want to have going on," Hurdle added. "And I just continued remind our club to stay focused on what we need to stay focused on."

However, some of the players I talked to admitted they may pay a little more attention than usual to the scoreboard.

Tony Watson said that the players won't be "totally submerged" in what is happening in St. Louis but they'll be "definitely aware of what is going on, for sure."

When I asked Watson if the team had a preference one way or the other about the outcome of the series, he hinted they'd like to see the Brewers win.

Jared Hughes agreed with Watson that there probably will be more scoreboard-watching than usual amongst the players over the next few days.

"A little bit," Hughes said. "But like Clint [Hurdle] said all year to us, 'You have to be where your feet are.'"

Asked if he had preferred outcome, Hughes' also laughed and said, "Hopefully it doesn't matter how that series goes because we just play so well that we run away with it."

So when he reported to spring training in 2014 and heard a new message from a new hitting coach, he was particularly receptive to Branson's emphasis on an improved two-strike approach.

"We didn't talk about two-strike approach too much with Jay Bell," Martin said. "Our two-strike approach has been better. Just staying short, not chasing too many pitches, not trying to get too big. It has helped us get more hits and grind out at-bats."

The priority the Pirates have placed on staying competitive in two-strike counts has paid off rather dramatically.

The Pirates are posting the highest two-strike OPS in the National League this season. Last year they ranked 11th. They are also striking out less, hitting to opposite field more and finding themselves in two-strike counts less often.

Breaking down the Pirates numbers even further, we can see almost across the board improved performance in both pitcher and even counts.

(The axis is league average OPS.) 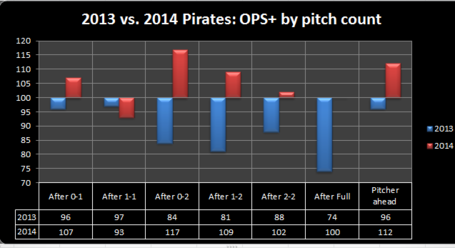 Jordy Mercer was scratched from the lineup about an hour before the game with back tightness. Clint Barmes takes his spot in the lineup and will play shortstop.