Clint Hurdle said no decision has been made regarding the Sunday starter against the Brewers. It appears that Charlie Morton is the primary candidate if his health holds, however.

"Charlie is going to throw today," Hurdle said. "He reported feeling well. He's going to go out and throw some flat ground."

Hurdle did not have much of an update on Jordy Mercer's status. He is still out with back tightness and Clint Barmes will get a second straight start at shortstop. Mercer worked out before the game and Hurdle did not know whether he would be an available player off the bench.

A lot of attention was rightfully given to Francisco Liriano's slider last season. It terms of pitch value, it was the second best slider in baseball in 2013, saving 20.6 runs.

This year Liriano's slider is still saving runs, but it is changeup that has become his most effective pitch. It has saved 9.6 runs and ranks ninth in the league.

Below is a comparison of Liriano's effectiveness with the changeup in 2013 and 2014.

Hurdle said that part of what makes Liriano's changeup so important this year is his command of the pitch, which allows him to throw it in any count, thus getting hitters off his fastball.

"The counts he is able to throw it in is what makes a very solid but average fastball velocity-wise, play even bigger," Hurdle said. "He can throw [the change in] a 2-0 count, 3-2 count, [which creates a] a different dynamic at the plate."

This season Liriano has thrown a changeup 33 percent of the time when he is behind in the count.

Below are some career comparisons:

He is throwing the changeup at a career-high rate. 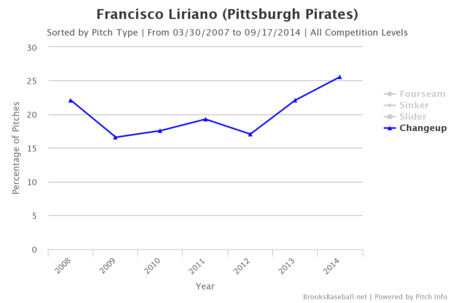 He is striking out batters with it at a career-high rate. 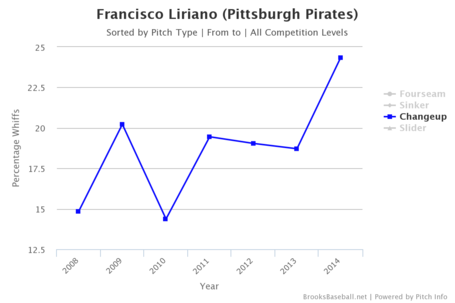 And batting average against is at a career low. 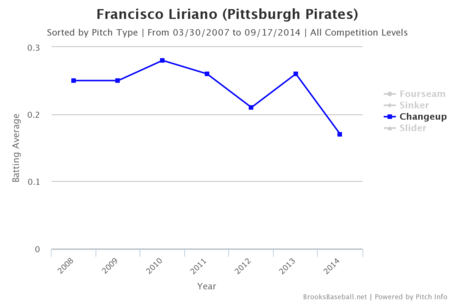 Holdzkom gaining confidence, but not comfortable

After another fine start sometime in the middle of June last season, Jeff Locke was asked if he was finally starting to feel comfortable as a major league starting pitcher. Locke shock his head and said that you never feel comfortable in the majors, but you do gain confidence.

Since joining the Pirates, John Holdzkom has overwhelmed major league hitters, striking out 11 of the 19 batters he has faced. When he was asked if Locke's distinction between confidence and comfort rang true for him as he starts to acculturate to success at the major league level, Holdzkom strongly agreed.

"Yes, of course," he said. "Every time you do well you build some confidence off that. [But] you're never done proving yourself either. Every time you go out there you have to prove yourself. That's the mindset."

Hurdle said that the recent additions and strong outings from the bullpen have made him more confident that the team has addressed the problems in the middle/bridge portion of the bullpen, which caused the team so many problems for most of the season.

"I am [gaining more confidence in the middle relievers]," Hurdle said. "It was a priority and a thing that we talked about here internally, Neal [Huntington] and myself. Getting a more versatile and strong bridge. Because it was getting to the point where it was the four guys playing out and you can't pitch them every day ... there is more all around depth with experience that has helped us."

The Pirates bullpen has been arguably the best in baseball in September.