Edinson Volquez is known to enjoy sleep, and he is the most laid-back, fun-loving player on the team. So, it is probably a good sign that the right-hander today smiled and said he "just chilled" at his house and "slept all day" yesterday.

Trying to read anything into a player's demeanor is always risky, but Volquez showed no outward signs that starting in the biggest game of the year was creating any additional anxiety or nervousness. Indeed, according to Volquez, one of his best friends, Francisco Liriano, is the one feeling nervous on his behalf.

"I'm really excited about tomorrow," Volquez said. "[But] I think Frankie is a little nervous, he told me as soon as he got here. And he doesn't have to pitch."

In another indication that Volquez is as loose as ever, apparently that comment was yet another joke at Liriano's expense. When I told Liriano what Volquez said, he laughed and denied being nervous for him.

"He was just having fun with me," Liriano said. "I just told him to continue doing what he has all season. I told him there will be more excitement from the crowd, but just do the same thing and give everything he's got."

"I was sick, so I was just worrying about my body more than the [significance] of the game," Liriano said. "I was kind of down [physically] so [maybe] that helped me to not try to overthrowing."

"Maybe Eddie should catch a little bug or something, then?"

"Yeah, but I think he'll be okay," Liriano said with loud laugh.

Perhaps one tangible way that Volquez's mindset matters is because so much of his success is contingent on maintaining a carefully calibrated set of mechanics, which have been a point of focus for him since he has arrived in Pittsburgh. More specifically, the right-hander mentioned keeping his tempo slow and making sure he doesn't open up to early and allow his arm to fall behind his body.

When his hands drift, Searage further explained, his arm ends up going side-to-side as opposed to top-to-bottom. Looking at the table below we can see five starts on the far-left where Volquez's arm seems to have drifted out to the side the most. In those five starts, he posted a 7.20 ERA and 2.9 HR/9 compared to a 2.38 ERA and 0.5 HR/9 in the remaining games. 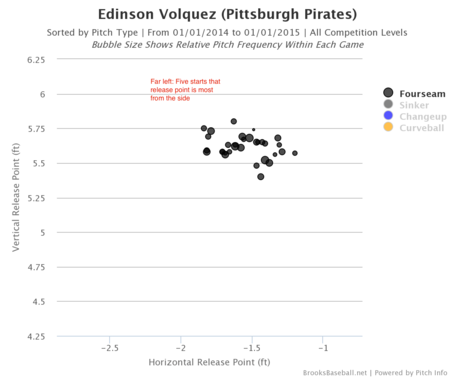 Another factor in the Pirates' and Volquez's favor is that it appears Russell Martin will start tomorrow. Besides the additional offense he adds to the lineup, Volquez has had success with Martin behind the plate. In 22 starts with Martin catching, Volquez's ERA is 2.57. In 10 games with either Chris Stewart or Tony Sanchez, he has posted a 4.31 ERA.

When discussing why Volquez has found so much success this year, Clint Hurdle brought up how well the catchers have done managing his games. With Martin, in particular, Hurdle emphasized the timing and quality of his mound visits as a subtle, but significant, reason that Volquez has had so much success with him catching.

When Martin talked to the press, a scrum of about 20 reporters and one pitcher surrounded him. The pitcher was tomorrow's starter, Volquez. When Martin saw him standing off to his right, he stopped talking and laughed.

Returning to the press, Martin addressed his status for tomorrow.

"Yes, ready to go," Martin said. "Yes, the [hamstring] will be fine. It's the playoffs, I'm ready to go. ... Maybe even it was amputated I'd find a way to get out there. This is why you play game. I'm not the only guy that's going to be banged up on the field. And the last couple of days [off] have helped out. I should feel pretty good."

"I just change the pace of the game a little bit," Martin explained. "[I] just try make sure they are consistent with their rhythm, that is really what I'm trying to do when I go out there."

Martin said that given the circumstances of tomorrow's game he is going to be less focused on watching Volquez's mechanics than he is on making sure his pitcher keeps the right frame of mind.

"I'm just looking for him to battle," Martin said. "I'm not going to be too worried about mechanics. I'm more concerned about competing. That's his job to focus on mechanics. If I see something that is a little off [I'll say something], but he is pretty good about correcting himself out there. In game, I feel like he is his own coach."

Finally, Bruce Bochy said that one thing he has noticed about Volquez this year is his command and maturity.

"He's always had great stuff," Bochy said. "I think sometimes his command has gotten in the way. But it looks like he has overcome that. He's not pitching himself into trouble quite like he used to. The fastball has always been there. It looks like now he's matured and throws more strikes. Consequently, he's not beating himself, like he used to sometimes."