A few years ago, Thomas Boswell of the Washington Post recounted his experience watching a young Greg Maddux toss pitch after pitch that seemed virtually indistinguishable from one another up until the point a batter already had to make a decision to swing. It was amazing to Boswell, who questioned Maddux’s uncanny ability to mask his pitches. The now-Hall of Famer simply answered that his goal was to "make all of [his] pitches look like a column of milk coming toward home plate." To this end, he spent a great amount of time honing his release and pitching trajectory in an attempt to conceal his arsenal from opposing hitters that combined with his stuff created one of the most successful pitchers in baseball history.

Yet, as incredible as Maddux was, not every pitcher shared in his methodical approach. For instance, Barry Zito’s release and trajectory often telegraphed the upcoming pitch, but his stuff was so dominant that batters couldn’t hit it even if they knew it was coming. Nonetheless, the concept of "pitch tunneling" that was so perfectly executed by Maddux has the capability to give a pitcher significant advantage over a hitter if they can replicate tunnels without sacrificing movement.

This past month, Baseball Prospectus revealed some groundbreaking statistics that focused on quantifying "pitching tunnels" to provide us some possible insight into a pitcher’s strategy and ability to conceal his pitches from opposing batters. We’ll do a brief synopsis about the new statistics here, but if you’d like a more complete delineation, check out the Baseball Prospectus article entitled "Introducing Pitch Tunnels."

To understand these statistics, one needs to know there are three locations of primary concern: the Release Point, the Tunnel Point, and Home Plate, all depicted here in an image from BP. 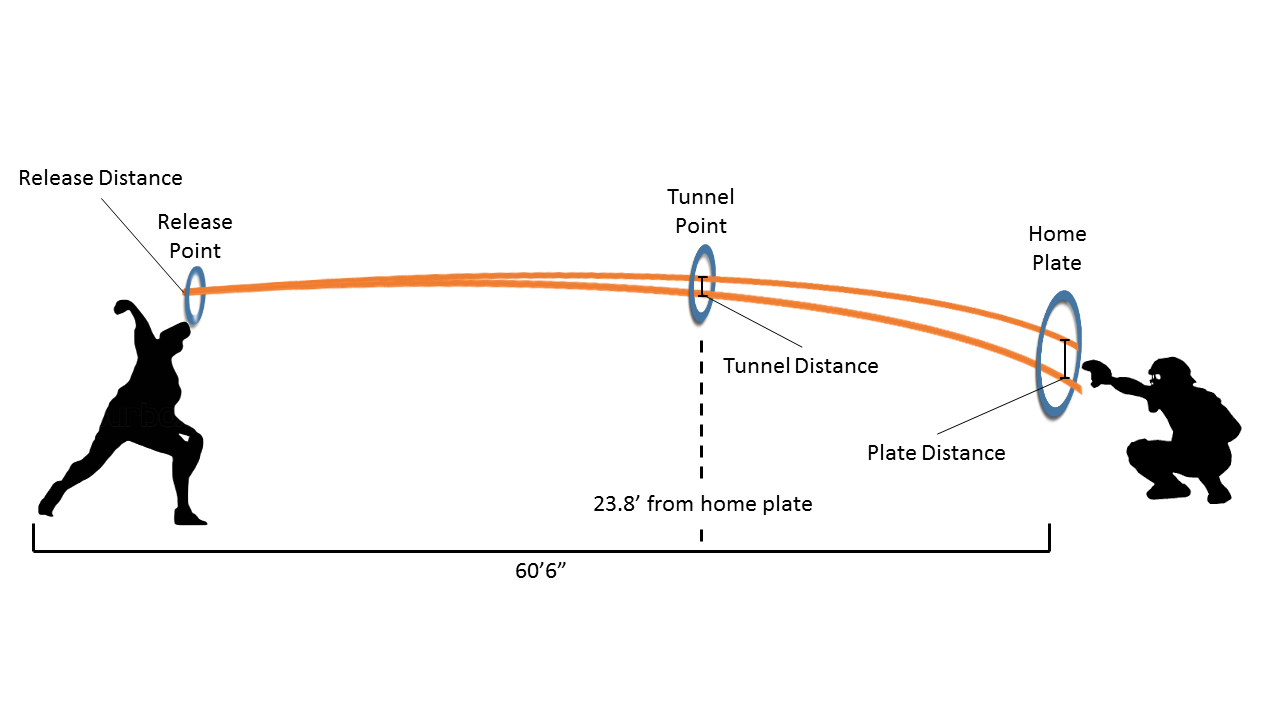 Even the casual baseball fan will be familiar with the first and the last, but it’s the "Tunnel Point" that may be unfamiliar territory. In short, a batter must identify approximately no later than 23.8’ from home whether they are going to swing at any given pitch. Therefore, this location of 23.8’ has been deemed the Tunnel Point and serves as a middle reference point for measuring the differential statistics involved in a pitcher’s masking of their repertoire.

Similarly, Tunnel Differential looks at the average variation between two pitches as they reach the commitment point for hitters, the Tunnel Point. With the target again being the minimization of differential, pitchers who excelled here tended to have similar trajectories on consecutive pitches so that a batter would have a hard time discerning the type of pitch. The league average arm sat around a .85 differential for this statistic.

This is also known as Break Differential and seeks to quantify the "spin induced movement" from the Tunnel Point to Home Plate. With the league average pitcher sitting around .21, it puts into perspective whose pitches have the greatest "late break." If you’ve ever seen Clayton Kershaw pitch, you know how nasty of a break his pitches can have and won’t be surprised to know he was the most dominant starting pitcher in this category with a .45 break.

This statistic takes the ratio of our first two differentials, Release and Tunnel, to quantify the ability a pitcher has to conceal the throw all the way up to the tunnel point. In this, a pitcher with a smaller ratio has displayed a stronger ability to keeper hitters from discerning the type of pitch all the way up to the decision point. As Baseball Prospectus summarizes these statistics, they used Jon Lester has an example because he is the paragon of excellence in this statistic with a 13.6% ratio, which is more 10% better than the league average pitcher.

Our final number finds the ratio of the Post Tunnel Break to the Tunnel Differential in hopes of identifying a player’s ability to balls that are "either tightly clustered at the hitter’s decision-making point or [where] the pitches are separating a lot after the hitter has selected a location to swing at." While Baseball Prospectus’ sample has a 27.6% average, the average for all pitchers in 2016 was just above 25%.

How did the Pirates Fare?

Overall, Nova was fairly close to average when it comes to break and tunnels. However, he did display a knack for repeating his release point spurring a Release: Tunnel Ratio that was not only about 5% better than the league average pitcher but also in the top 200 for all pitchers.

Since the differential statistics measure consecutive pitches, it’s useful to know the sequence of pitches that a player most typically used. For Nova, it unsurprisingly revolved around the sinker, with Sinker-Sinker, Curveball-Sinker, Sinker-Curveball, and Curveball-Curveball as his most frequently used combinations. He was extremely consistent with his sinker, but whenever he utilized his curveball, Nova either struggled to conceal it or didn’t care, with elevated tunnel differentials approaching or exceeding 1. Interestingly, it was actually his most effective offering in terms of opposing batting average as batters hit below the Mendoza line against it, but Fangraphs’ Pitch F/X Value had Nova’s usage of it as well below average in 2016.

As expected, the Pirates' ace excelled at replicating his release and tunnels, but his break differential and ratios are a bit misleading because Cole utilizes a fastball about 2/3 of the time, which was around 13th among starters last season. If you toss less breaking balls and offspeed pitches than the average pitcher, then you’ll naturally have a lower break differential. It doesn’t necessarily mean your non-fastball offerings are good, but that’s not an issue for Cole.

According to Pitch F/X statistics, both Cole’s slider and his curve have horizontal movement among the top thirty of corresponding pitches. BP’pitch pair data affirms that data by revealing the following sequences all exhibiting above average late break as it approaches the plate.

In short, Cole keeps pace with the high-caliber starters across the board. Combined with his wicked stuff, that allows him to dominate, so lets hope he can stay healthy this season.

In his debut season, Taillon lived up to the long-awaited expectations relying heavily on his two plus pitches, fastball and curveball, and pinpoint control, so his numbers above shouldn’t catch you off guard too much. He particularly excelled when it came to tunnel:break ratio coming in 34th among 743 eligible pitchers in 2016. In fact, his CU-FA, FA-CU, CU-SI, and SI-CU (four out of his most used sequences) all came in better than Cole’s best sequence with CU-FA hovering around a .8 differential.

If there’s anything that Taillon could potentially improve as indicated by tunneling statistics, it’s that his release differential and tunnel differential are slightly worse than average when he throws his devastating curve.

At first glance, Kuhl’s numbers look fine except for a glaring weakness when it comes anything to do with late break, and closer scrutiny of his pitch sequences offer no signs of the Cole-like numbers. This doesn’t mean that his breaking balls are bad -- on the contrary, Kuhl’s slider held opposing batters to a .165 average and an incredible .101 ISO. Despite the less-than-spectacular movement, Kuhl throws one of the hardest sliders in all of baseball with an average velocity of 86.6 mph.

Also of note is that he could be tipping off batters with release when he uses the changeup….especially when thrown next to a sinker with release differentials north of .30. The .9 below average might not seem like a lot, but it ranks somewhere in the bottom sixth of all pitch sequences.

Brault, Glasnow and Hutchinson all have rather small sample size, so while there could be some indications of there various struggles, they won’t be all that definitive. In the case of Brault, the numbers don’t paint a pretty picture even if the aggregate numbers above look passable. If he wasn’t throwing the same pitch twice in a row, he had difficulties concealing via release or tunnel. For example, nine of 13 of the available instances of pitch pairs that didn’t feature the same pitch twice displayed a below average ability to conceal a pitch via release or trajectory, which combined with a limited repertoire partially explains why opposing teams boasted a .382 wOBA against him.

Outside of tunnel differential, the Pirates' top pitching prospect posted some gaudy numbers driven by his strong post tunnel break. That post tunnel break made him one of the about 10 starting pitchers to be within .7 of Clayton Kershaw, and Glasnow’s Break:Tunnel ratio came in three places higher than teammate Jameson Taillon’s. No one really needs these statistics to know that Glasnow needs to harness control of his stuff, as is even affirmed by the tunnel differential, if he wants to carry over his success from the minors, but in just his first taste, there are encouraging signs.

Hutchison’s total numbers bare an unlikely resemblance to Cole’s, but he’s obviously no where near Cole in terms of raw talent or past success. Unlike Cole, Hutchison isn’t sitting on a dynamic breaking ball to boost his late break numbers; he just tries to be as consistent as possible with release and tunneling. Let’s hope Ray Searage can perform some magic to find a way for Hutchison to be effective in some capacity if pressed into action.

Reflecting on the Data

Clearly, pitching is complex, with a multitude of factors that are much bigger than just tunneling statistics. But the development of these stats could help direct organizations towards sequencing and mechanical adjustments that could make a pitcher more successful, or at the very least, it could prevent them from tipping off hitters about what pitch is coming next. For just as the Time Through the Order Penalty can give an advantage to hitters, so also a pitcher's inability to conceal his pitches at both the release and tunnel point will give batters a leg up at the plate. In the end, neither is substitute for dominant stuff, but there’s a reason not all guys with dominant stuff find a way to succeed in the big leagues.